Albania has quickly become a popular summer destination. Their stunning coastline and beautiful beaches are surely some of the major factors behind the rise in numbers of arriving tourists.

The Albanian Riviera is home to many beautiful places, and to make things a bit easier for your travel planning, here are the 15 Best Beaches in Albania to visit in 2019.

One of the “hidden” gems of Albania, and truly a paradise beach. Visitors can go there by boat or car, however, car travelers will need to walk a bit down to the beach.

The beach is squeezed in between high cliffs, which gives you that feeling of being on a deserted island rather than on a regular beach.

The water at Gjipe Beach is crystal clear and has the most amazing turquoise color. Adventurers can also find some smaller beaches along the coastline as well as caves. 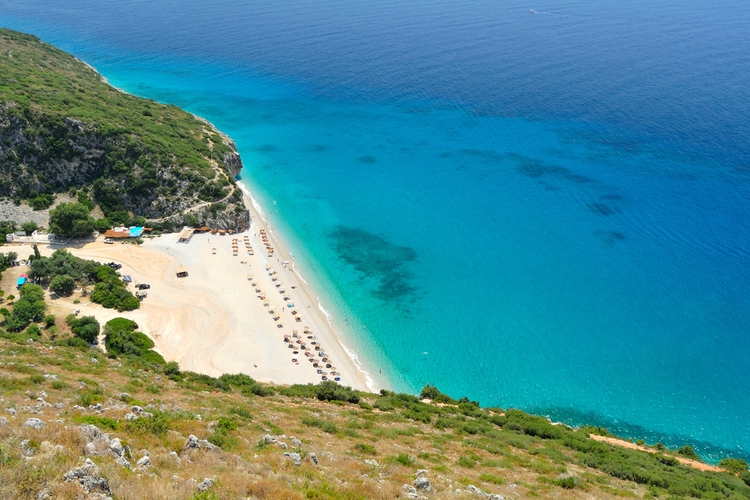 One of the most beautiful places to visit in Albania, Grama Bay makes an incredible beach day and it’s a popular day trip from Vlorë.

Featured Video from My Travels
Beautiful view of Lanikai Beach from Pillbox hike in Oahu, Hawaii

It’s best visited by boat, however, hikers can enjoy a seven-hour long walk. Camping is allowed, but make sure to bring water, food and other necessities as Grama Bay is isolated and unserviced. 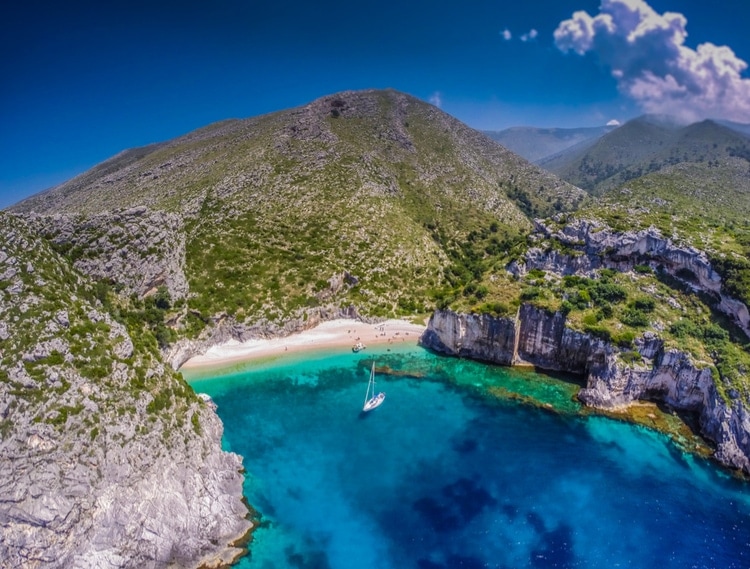 Dhermi is renowned for its nightlife during summer and its traditional stone houses. In recent years, more and more Scandinavian tourists have found their way here, and it’s both beautiful and less crowded than other beach destinations in Albania. 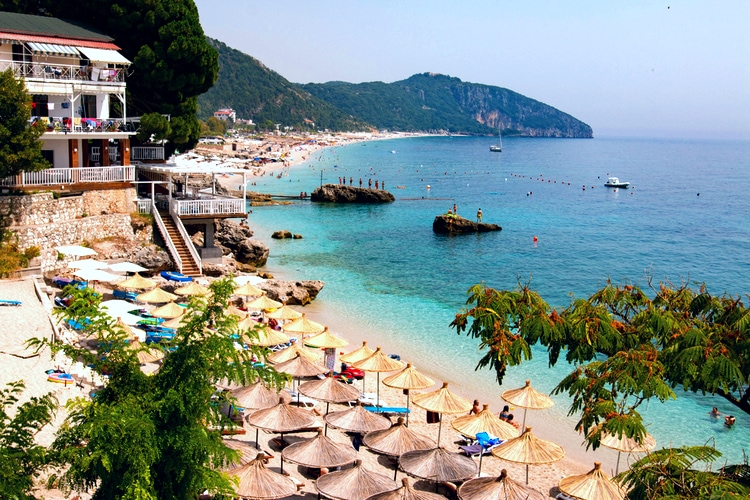 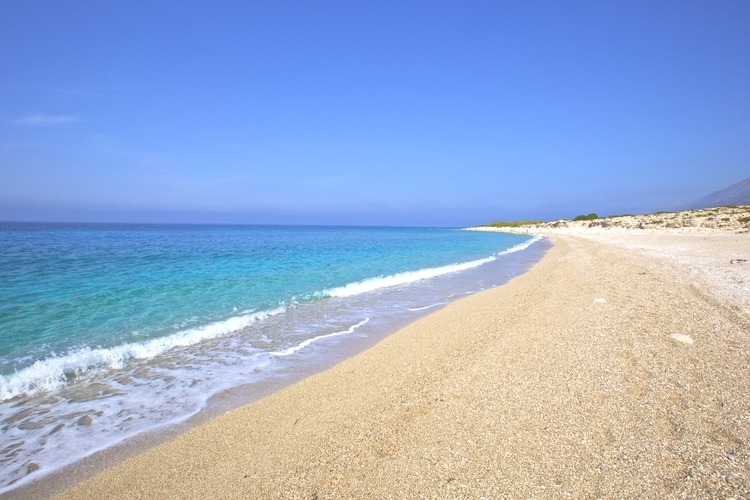 If you’re visiting Himare, then you shouldn’t miss Livadhi Beach, which is just a short drive from the town center.

Livadhi Beach is one of the longest beaches in this region, and it has become famous for its deep blue water as well as surrounding olive trees.

The beach is divided into two parts, Gonia (North) and Apelistra (South). During summertime, visitors will find all necessities needed including restaurants, cafes, and watersports. 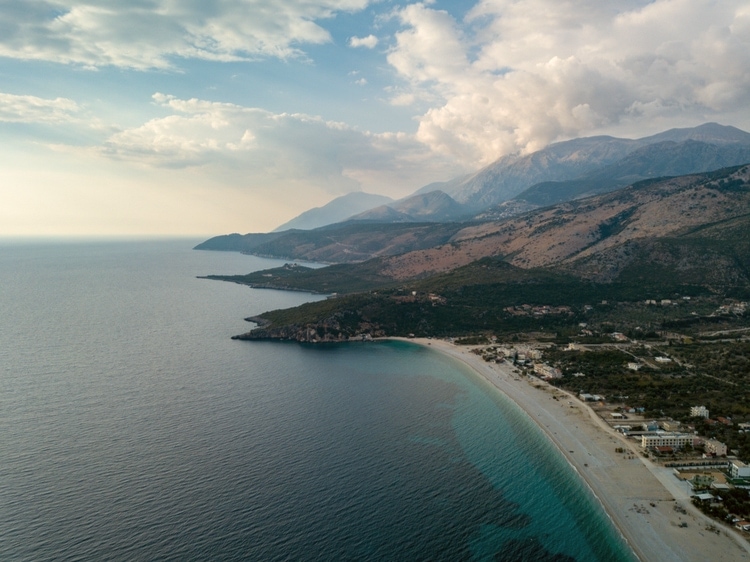 Said to be one of the longest beaches on the Ionian Sea coast, Borsh is famous for its blue water and quality beach.

The beach is 7 kilometers long and is still quite untouched by mass-tourism. You can get here easily from Saranda and Himara by bus, taxi or car. 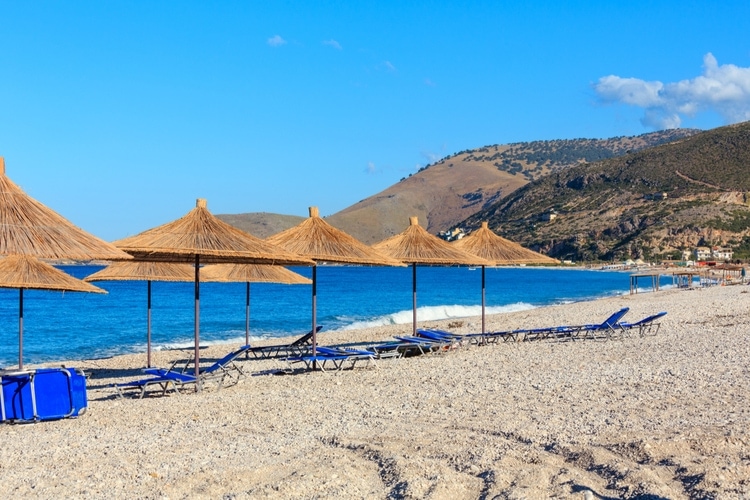 Lukova Beach is one of the most famous Albanian beaches along the Riviera, and it’s truly one of the best beaches in Albania.

It is surrounded by greenery and crystal clear blue water. 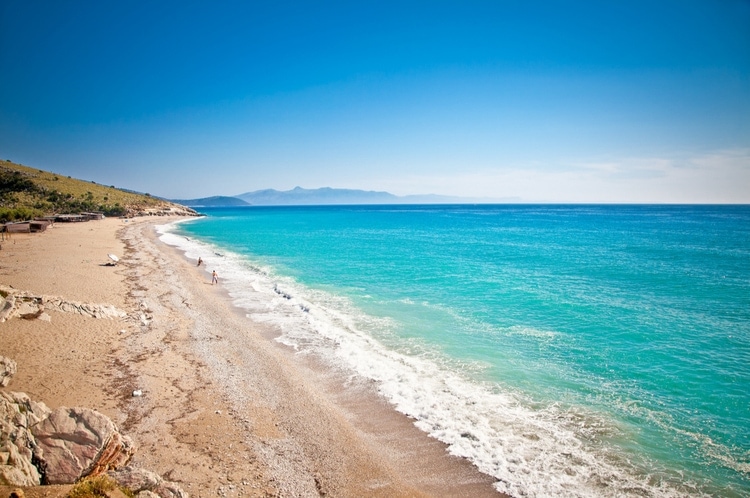 A beautiful little beach between Saranda and Ksamil. It’s located north of Ksamil, and in Albanian, it’s known as “Plazhi i Pulëbardhës”. 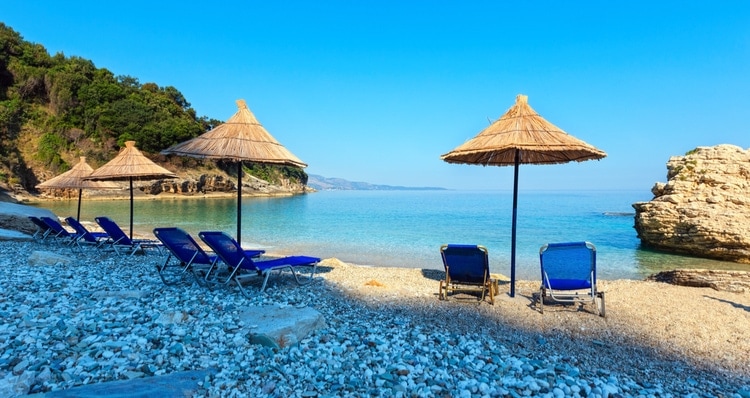 A popular beach in Saranda which has all the amenities you need for a great vacation. Saranda is also a great base to explore Southern Albania, and there are plenty of hotels and restaurants in different price ranges. 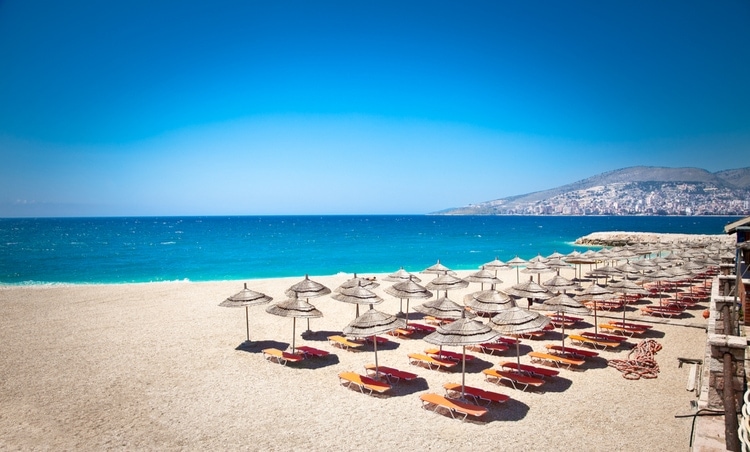 Also known as Pasqyra beach. Somewhat a hidden gem for most parts of the year, but in August it tends to get pretty crowded. Mirror Beach is famous among locals, and it’s located north of Ksamil.

It’s a sandy beach, and it’s quite easy to get here from both Saranda and Ksamil, either by bus or taxi. 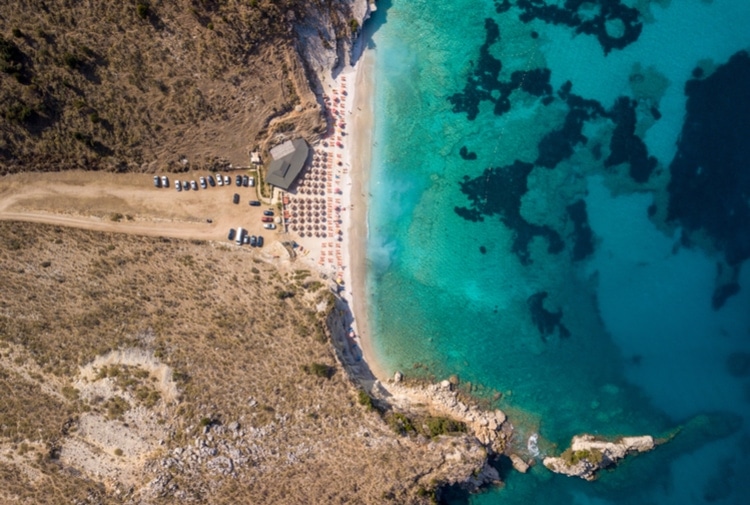 There are actually several beaches in Ksamil, so you won’t have a problem finding a nice spot in the sand here.

A heads up though, while Ksamil is truly a paradise in Europe, during July and August, it will be packed with people just like other popular destination in the Mediterranean region.

The best time to visit is either in May or early June or after summer in September. 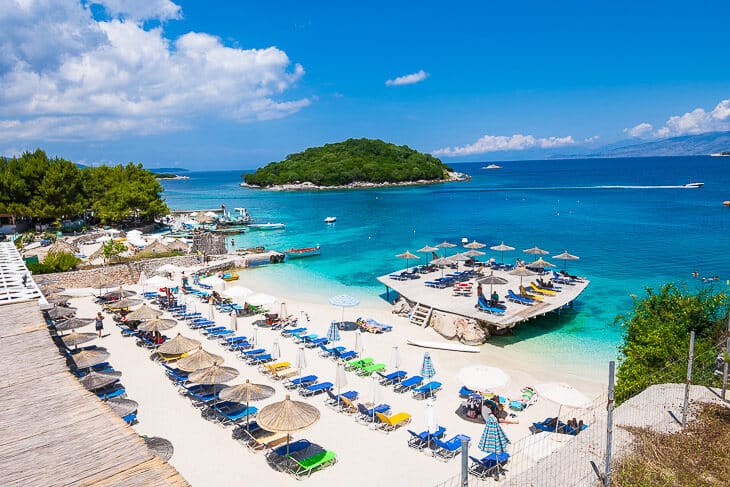 A natural beach with the most gorgeous watercolor. Palasa Beach is located north of Himara and Drymades beach, and it’s still quite untouched and there are not too many buildings and development nearby.

It is also famous for being home to a night club and great parties during summer.

Dürres is just a 40 minutes drive from the Albanian capital, so in addition to international tourists, it’s also popular among the locals during summer. Here, you have everything needed for a nice beach vacation, and it’s very easy to get here from Tirana. 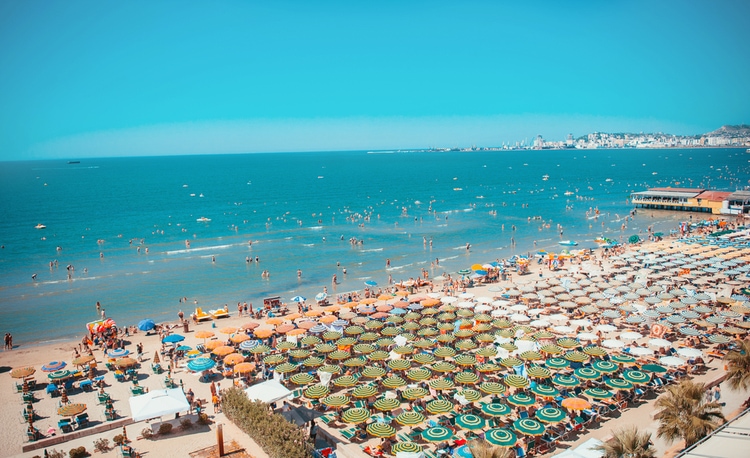 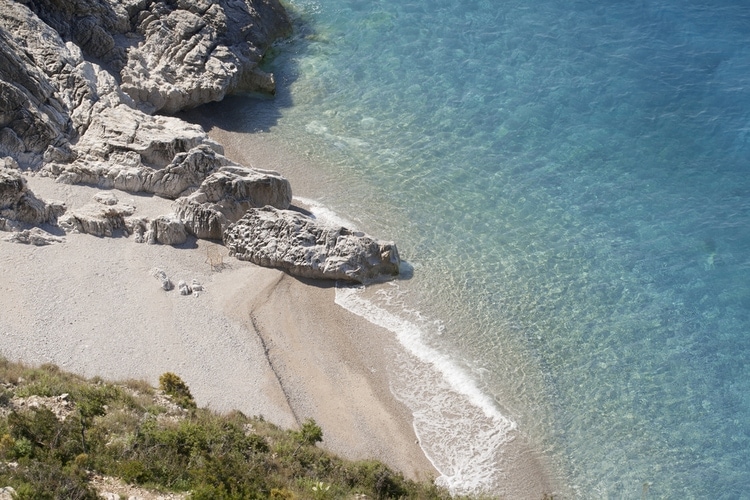 One of the most unique beaches in Albania, Rana e Hedhun is home to some impressive sand dunes that are located on the slopes of the mountainside.

It’s located near Shengjin, and it’s about 1.5 hours drive from Tirana. Thanks to a relatively new constructed road, Rana e Hedhun is now easily accessible from the road. 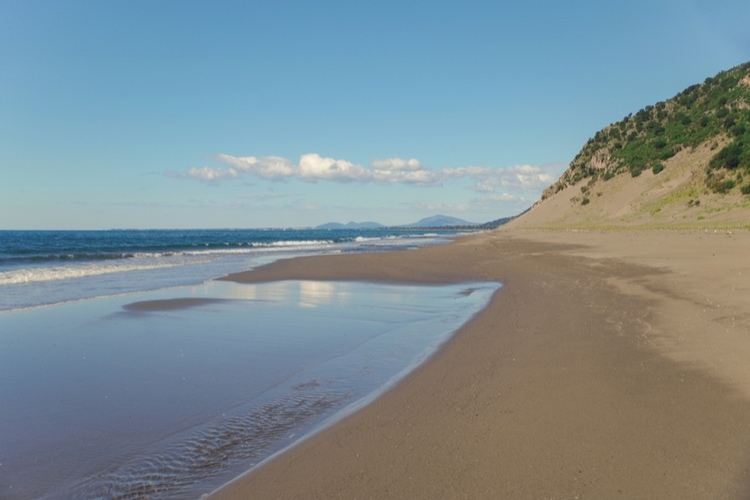